The day started off innocently enough, we were heading towards Inglewood to see Helen Lundeberg's WPA mural "The History of Transportation." I only had a vague idea of where it was located and we did our usual 'lets hit up anything that looks interesting along the way.' After the obligatory stop at Randy's donuts we headed east on Manchester and passed by a very cool intaglio piece snaking up the side of a building. We circled the block to get a closer view and discovered signs pointing us to a public library. 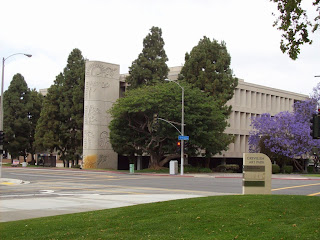 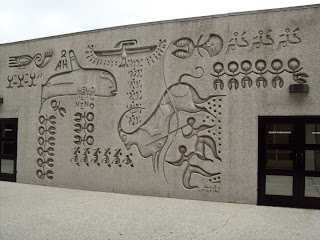 The ability to check out Criswell Predicts From Now To the Year 2000 (1968), in which the Amazing Criswell prognosticates computers ('education and newspapers which will be available through your TV') and same-sex marriage (though he did think it would happen in England by 1972). Its been a fun read. 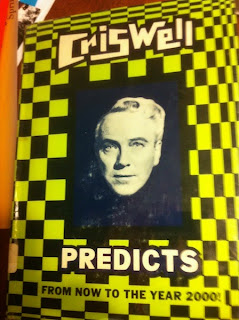 They have artwork available for circulation!

Inglewood's former Library Director John W.Perkins (1962 to ?)must have been a hell of a guy. The collection developed by the library during his tenure is amazing. There are so many volumes here that I haven't seen in other systems. We'll be sure to check out their online catalog before our next visit, similar to LAPL's Central Branch they have more material in a depository downstairs, but are happy to retrieve the items.

The parking lot was metered and unfortunately we didn't have enough change in the car for more than an hour of browsing but the quick tour we made, and the new library card we acquired, ensures that we'll be back.

The above blog post has been sitting in my drafts file for a year (our original visit was May 24, 2013). Aside from the fact a year flies by in the blink of an eye, here is what else I learned within that year.

Inglewood's former Library Director John W. Perkins was indeed a hell of a guy who amassed an amazing collection, AND wrote or commissioned many books on library service and administration (take a look at them on Worldcat). I was able to get most of these books through interlibrary loan and found them interesting and forward thinking -- they even published Library of Congress Classification Adapted for Children's Library Materials! Another fascinating read associated with the Inglewood Library was a report documenting their decision to break free of the Los Angeles County Library system and become a municipal library. Perkins was hired on following the split and did a remarkable job of building a research library in Inglewood.

Sadly the collection has undergone heavy weeding within the past year, so get down there and check it out NOW!
Posted by Tiffney Sanford at 3:18 PM